Craighall Castle is located in Ceres, Fife, Scotland.[1][2] It was built in 1637 by Sir Thomas Hope but there was a tower of previous land owners before 1637. It is now demolished and only some of the castle’s walls remain.[3][4]

The lands were owned by Andrew Kinninmond and his family before selling it to Sir Thomas Hope. Hope built the castle in 1637. In 1954, the old tower was removed after the castle’s granary burnt down. The castle was in very poor condition and was demolished in 1957. Some portion of walls still remain.[3]

The surname Hope may be of native Scottish origin, being derived from the Scottish Borders family of Hop or Hoip.[4] In 1296 John de Hop of Peeblesshire and Adam le Houp both appear on the Ragman Rolls submitting to Edward I of England.[4] Alexander Nisbet suggested that the name may be from the H’oublons of Picardy family in France.[4] The French word oublon means hop, which when translated into English becomes Hope.[4]

The immediate ancestor of the principal line of the clan was John de Hope who is said to have come to Scotland from France in 1537 (see link above for alternative John de Hope) as part of the retinue of Magdalen, the first wife of James V of Scotland.[4]

I have also recently come across this piece from “Traditions of Edinburgh by Robert Chambers, 1868…

It is worthy of notice that the Hopes are one of several
Scottish families, possessing high rank and great wealth, which
trace their descent to merchants in Edinburgh. ‘The Hopes
are of French extraction, from Picardy. It is said they were
originally Houblon, and had their name from the plant [hop],
and not from Esperanza [the virtue in the mind]. The first that
came over was a domestic of Magdalene of France, queen of
James V. ; and of him are descended all the eminent families of
Hopes, This John Hope set up as a merchant of Edinburgh,
and his son, by Bessie or Elizabeth Cumming, is marked as a
member of our first Protestant General Assembly, anno 1560.’*

John married and settled in Edinburgh where he prospered.[4] He had a son named Edward who in 1560 was a commissioner to the General Assembly of the Church of Scotland for Edinburgh.[4]

John’s descendant, Sir Thomas Hope, was appointed Lord Advocate by Charles I of England.[4] Thomas acquired the estate of Craighill which is in the parish of Ceres, county of Fife.[4] Craighill became the chief’s designation.[4] Sir Thomas was a lawyer whose work Hopes Practicks (full text available) is still sometimes referred to by Scots lawyers today.[4] He was created a Baronet of Nova Scotia in 1628 and helped draft the National Covenant in 1638.[4] He died in 1646 and his eldest son succeeded to the Baronetcy, taking the title Lord Craighill.[4] He is credited to have advised Charles I of England, while in exile: tret with Cromwell for the one half of his cloak before he lost the whole.[4]

A junior branch of the clan were the Hopes of Hopetoun who descend from a younger son of the Lord Advocate.[4] This son acquired lands in West Lothian and took the territorial style, Hopetoun.[4] His son was John Hope of Hopetoun who drowned in the wreckage of the Gloucester and it is believed that he died saving the Duke of York (later James VII of Scotland and II of England).[4]

John Hope of Hopetoun’s son was Charles Hope who in 1702 was elected to Parliament for Linlithgow.[4] He was later appointed to the Privy Council and in 1603 was raised in the peerage as Earl of Hopetoun.[4]

In 1729 the sixth Baronet sold the estate of Craighill to his kinsman the Earl of Hopetoun.[4] The Earl of Hopetoun’s estates grew rapidly in the 18th century with most of West Lothian, and parts of East Lothian and Lanarkshire.[4]

Professor John Hope FRSE FRS PRCPE (10 May 1725 – 10 November 1786) joint founder of the Royal Society of Edinburgh. He was the great-grandson of Sir Thomas Hope, 1st Baronet.

Sir John Hope, 4th Earl of Hopetoun had a notable military career, serving throughout the Peninsular War.[4] In 1822 he staged a magnificent reception for George IV at Hoptoun during the king’s famous visit to Scotland.[4]

Thomas Charles Hope (21 July 1766 – 13 June 1844) (Son of Sir John)  FRSE FRS PRCPE FFPSG Scottish physician / scientist. Sir Charles Darwin was one of his students: Darwin recalled: “The instruction at Edinburgh was altogether by Lectures, and these were intolerably dull, with the exception of those on chemistry by Hope.” Professor Hope fared better than Professor Duncan, of whom Darwin said: “Dr. Duncan’s lectures on Materia Medica at 8 o’clock on a winter’s morning are something fearful to remember.” (Linda Hall Library)

The seat of Hope baronets of Craighall was moved from Craighall Castle in Fife to Pinkie House in Musselburgh, East Lothian, Scotland. Originally built in the 16th century,

Pinkie House was acquired by Sir Archibald Hope, 9th Baronet of Craighall, in 1778, until sold in 1951. Pinkie house is now Loretto School Founded in 1827, Loretto School is a boarding and day school for boys and girls aged 0-18 years near Edinburgh. A small School, big on heart, big on ambition.

Hopetoun House owned by the Hope family who acquired the land in the 17th century. Charles Hope lived there at age 16 yrs

The below part is from the link on AJBHope.net web site and have to give all credit to the fine research he has conducted in bringing the information on the origin of the Hope name and the descents there of.

Origins of the Surname of Hope – Section 3 (from AJBHope.net)

Until late in the twentieth century, it was recognized that the ancestor of the Hope family of Edinburgh was Jean des Houblon who in 1537 came to Scotland in the train of Magdalen of France the young Queen of James V. King of Scots.  However, diligent research by the Late Ann Hope and others has shown that a much more likely candidate as ancestor of the family is John Hope (c1472-1554) a merchant and Burgess of Edinburgh.  I think that it is probable that his surname of Hope was imported from Holland/Flanders  and that the name was derived from Van der Hoop – Esperance.   More about this on the  Hope Origins page and Hope Heraldry page.  The Queen Magdalen story still persists – thanks mainly to the Court of the Lord Lyon – presumably as this was the story given by Thomas Hope (1573-1646) when he matriculated his arms when he became a Baronet in 1628.  A simple genealogical DNA test should indicate whether the Edinburgh Hope families have Flemish ancestors or not.   The following is based on Ann Hope’s research ie that the ancestor of the Hope family of Edinburgh was John Hope a Burgess of Edinburgh and a Royal Trumpeter.  However John Hope was not the first of the surname of Hope in Edinburgh as this was a Thomas Hope who owned property in Leith in 1470-1490.   Thomas was probably an ancestor of John as it recorded that in 1522 John had lands near Leith, lands that John must have inherited. See also this complete overview of the Hope surname in Scotland in The Scottish Nation- HOPE

We can also see on the tree below Henry Hope who was part of  Hope & Co of Amsterdam one of their most important clients was Catherine the Great of Russia. 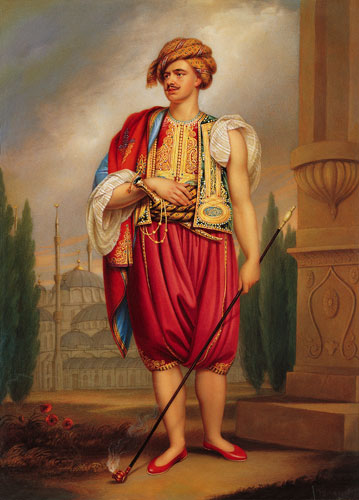 Thomas Hope (30 August 1769 – 3 February 1830/1831) was a Dutch and British merchant banker, author, philosopher and art collector, best known for his novel Anastasius, a work which many experts considered a rival to the writings of Lord Byron.[citation needed] His sons included Henry Thomas Hope and Alexander Beresford Hope. He eldest son of Jan Hope, Thomas was descended from a branch of an old Scottish family who for several generations were merchant bankers known as the Hopes of Amsterdam, or Hope & Co THE FAMOUS AND INFAMOUS JEWELLERY COLLECTIONS OF HENRY PHILIP HOPE

Henry Philip Hope (1774-1839) brother of Thomas Hope, was a wealthy British banker with an affinity for fine art and precious gems. An 1839 catalogue of his gem collection mentions a large blue diamond weighing 45.5 carats. The diamond would take his name, becoming known as “Hope’s Diamond” or the “Hope Diamond.”

As you know I have been working on the lineage for our group member Alan Hope of southern England and his family. JACKPOT

Alan Hope, John Hope and Mike Hope, good news I have identified your Hope lineage, the paper trail I worked out goes back to:

Note: Daughter of Joseph Hope, Susanna Hope born 11th January 1804, in Rickergate Marys, Carlisle. Susanna’s grandmother was reported to be the cousin to the Earl of Hopetoun, Scotland. The Marquis of Linlithgow has the same family coat of arms: On a field gules a chevron argent in the base a sword, 2 cinque foils dexter and sinister crest a hand dexter holding a thistle. Below is written: MIMO MORI QUAM FOEDARI.

Trivia from Daily Mail   Revealed: Earl of Hopetoun’s son Viscount Aithrie (Charles Hope) is page boy who fainted in the middle of the Queen’s speech

You are descended from Thomas George Hope b.13 July 1761.

This line has been identified through Y-DNA as descending from what we call the Viking line which so far has been traced back to the late 1500’s in Northumberland. Y-DNA identifies this line as originating in Norway.

I have no information on your Thomas George Hope or his brother John; however, their brother Joseph Hope b.2 May 1773 was a VERY wealthy merchant. One of his sons was the Military Aide De Camp to the first Governor of Australia  Also see (1 January 1901 – 9 January 1903 Rt Hon. John Adrian Louis Hope, 7th Earl of Hopetoun, KT, GCMG, GCVO.

Stephen Hope of the Clan Hope of Craighall Society of Australia kindly provide this insightful information on Sir John Adrian Louis Hope 7th Earl of Hopetoun, 1st Marquess of Linlithgow. He was the Governor of the state of Victoria, Australia from 1889 to 1895 and supported Federation. He returned to the UK and was a member of the House of Lords. When Australia Federated he was asked to return as our first Governor General. On his return to the UK he was elevated to Marquess of Linlithgow. We have a number of locations in Australia named Hopetoun in his honour and a small steam launch called the ‘Lady Hopetoun’, which was built during his time as Governor General and named for his wife, is still cruising Sydney Harbour as part of a heritage fleet.

This family line is represented in the USA, Canada, Australia, France and the UK, it is the second most popular Hope lineage in the Family Tree DNA, Hope surname DNA project.

Just FYI, (Richard R Hope) I am also descended from a branch of this same family tree.

This is a current picture of my family of Hope’s, from James Henry Hope in the center Chris Hope on the right in the photo followed by Roman Hope in front Eve Hope, Rachel Hope and Roxanna Hope (my daughter) and little Oscar Hope (giving a royal wave). Then to the left behind James is me, Michael John Hope, Ollie Hope, Daniel Hope, Lynn Hope and Evie Hope… This picture always warms my heart… The one cherished Hope above all is Barry James Hope who belongs in the center of the picture but will forever remain in the center of our hearts…

1839 Catalogue of the Gem collection of Henry Philip Hope